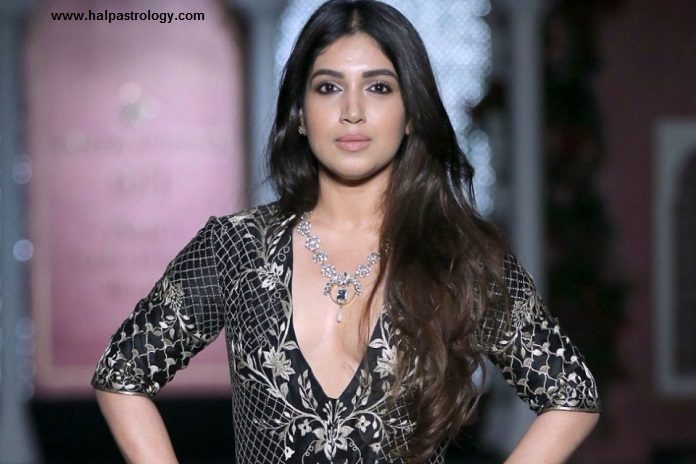 Bhumi Pednekar, who started acting in the public through the film ‘Dum Laga Ke Haisha’, was born on Tuesday, July 18, 1989, Mumbai in the capital of Maharashtra, in the Pisces Ascendant and Sagittarius zodiac sign and the Purva Ashadha Nakshatra.

Jupiter, the lord of Ascendant in the birth chart of Bhumi Pednekar is very auspicious and “RajYoga” planet. It never gives bad results. Jupiter is in the fourth house through the sign of Gemini and the planet Moon is in the tenth house. Jupiter was looking at the moon planet from the seventh point of view, so “Gajakesari Yoga” “Kuldeepak Yoga”, “Padmasinhasan Yoga”, “Yamininath Yoga”, and “Hans Yoga” are being created in her horoscope. Therefore, the Bhumi Pednekar will get physical resources as well as respect from the state government. ”  ‘‘अनेक सुखभोगी च ख्यात कीर्ति हारो भवेत्’ It is clear from this that communication of fame and name will also be found in life.

They are sitting together in the tenth place of Moon and Saturn in their horoscope, hence there will be benefits in getting wealth, travel abroad and business, but the moon planet is making ‘Shadashtak’ yoga here which will make you mentally suffer during acting and so forth. Going away will also worry about the child. There will be delay in marriage as well as caution is also needed in choosing a life partner, because reaching the peak of success is the absolute sum of falling from high. Money will be lent, it will not be returned, it will become a matter of dispute over the reverse land, but despite all this, the full vision of Jupiter on the moon and Saturn will taste the acting as well as the politics.

You will suddenly get auspicious results in the time of the Moon, the lord of fifth place, only then you will travel with your family on foreign and religious trips. While Saturn is making a very expensive nature, it will also do work of service and religion. The planet Moon will make you superior in the family and the family members will work only with your consent, due to the ‘Kuldeepak Yoga’ in the horoscope, the name of the family will be illuminated like a lamp.

With the arrival of the planet Venus, Rahu and Jupiter at the time of Moon planet, the lord of fifth place in their lives, they performed their performance in front of the public from the film ‘Dum Laga Ke Haisha’ on 27 February 2015 and glorified the award, ” Filmfare Awards, Producers Guild Film Awards, Screen Awards, Zee Cinema Awards, Strudest Awards, Big Star Entertainment Awards and International Film Get the Academy Awards. Earlier Bhumi Pednekar was working as Assistant Director in Raj Banner.

The planet Mars, the lord of the destiny place, is extremely auspicious in the triangle, although Mars is low in Cancer, but here Mars is getting rid of the defects of low and Marrakesh. The effect of Mars is beneficial in life, in such a Mars, the presence of acting lord Venus enhances her acting, then on 11 August 2017 your film “Toilet-Ek  Prem  Katha” with superstar Akshay Kumar gave a taste of success.In September of the same year, the third film Shubh Mangal Savdhan also got a lot of money.

Ketu being in the sixth house is making Bhumi Pednekar attracted to brave, narcissistic and antagonistic sexes, due to which the acting will be of a different kind, whereas Ketu will also invest money on proptry in its condition, but by nature Ketu’s disease will be in place. Being sick is also indicating any disease, along with eye disease, so special attention should be paid to the eyes.

Second house is the place of speech, so the conjunction of Mercury, Sun and Venus with Mars is in the fifth place. In the voice of Bhumi Pednekar, there is a sense of clarity, brilliance, brilliance, due to which, by using speech, it can achieve great success in the acting world.