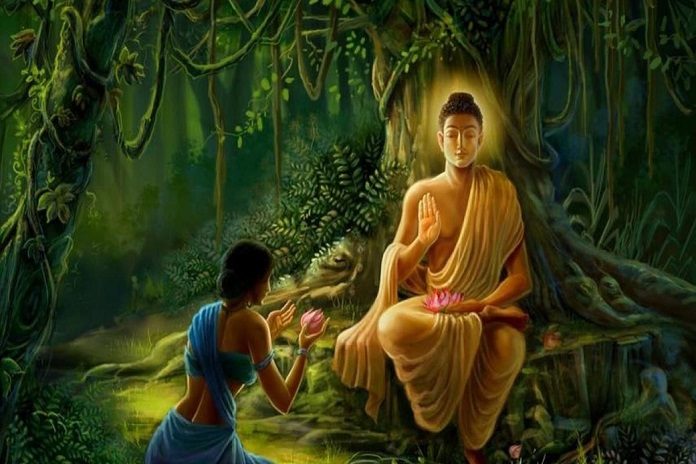 As soon as the name of Lord Buddha comes, “The feeling of pure, cleanliness and quietness comes on its own in the heart.” Gautama Buddha is considered by many scholars to be one of the great personification of Lord Vishnu who liberates man from the bondage of life and death, and brings him to Brahma, just as Lord Krishna had said to Arjuna, O Partha, ‘You do my devotion,  Leave everything else to me ‘, while connecting the link of such incarnations, keeping myself apart from all the joys and sorrows of the world,’ Buddha Sharanam Gachchami ‘i.e. I take refuge of Buddha because Siddhartha who took the path in his life It was not a simple path but the path of religion, due to which Mahatma Buddha, Buddhism, Hindu and India became the souls. Whenever any Lord Buddha in the world comes to know, he will also need to know India.

In Lumbini, Lord Gautama Buddha was born in Ikshvaku dynasty Kshatriya Shakya clan in 563 BC. The birth name of Gautama Buddha was Siddhartha which means ‘one who is born to attain Siddhi’. His father’s name was Shuddhodan who was the king of Kapilavastu and mother Maharani was Mahamaya Devi, who died within seven days of giving birth to Gautama Buddha, after which she was brought up by her aunt Gautami. At the time of Siddhartha’s birth, the sages had predicted that this child would become a great king or a pioneer because it is a great soul.

By the way, Siddhartha got the knowledge of Veda Upanishads by Teacher Vishwamitra and Siddhartha also learned the Upanishads and the knowledge as well as the martial arts because his father King Shuddhodan wanted to make his Chakravarti emperor, hence all the arts, Rajkajas, Horse riding,  Wrestling etc. Due to this, many teachers of Siddharth such as Vishwamitra, Kalam, Uddaka, Alara, Ramaputta, etc. have taught, who gave different styles to Siddhartha. Affection, mercy and compassion were filled with guts in the mind of Gautam Buddha, due to which he often preferred to lose the winning bet so that the loser would not be sad. Gautam Buddha could not see any human, animal, birds, animals etc. unhappy since childhood. He also had a special love for animals and birds. When in childhood, his cousin Devadatta shot an arrow at a swan and injured it, then Siddhartha protected the life of that goose. Many such incidents have happened in the life of Gautam Buddha. Which shows kindness, compassion, tolerance and religion etc. and it was only through these teachings that Buddhism came into vogue.

For Siddharth, his father had also built three palaces according to the rituals, which included bhoga-vilas, with special arrangements for Luxury, Slaves – maids, dances etc. and he was married to Koli girl Yashodhara at the age of just 16. Was Siddhartha had a son named Rahul, born. But despite having so much enjoyment, entertainment, wife, son, etc., his mind had gone into disinterest, left everything free from happiness and sorrows.

Siddhartha goes for a walk in the garden four times, every time he sees something like, for the first time an absolutely old man was found who was completely in a shabby state. The second time he found a sick person suffering from the disease. A third time I found a bier who was being taken to the crematorium. After seeing all this, Siddharth thought in his mind what kind of life is this? This body has to be destroyed one day, this youth, this healthy body, everything will be finished, this death will continue forever. Damn to such a life, the mind became distraught. When Siddhartha went for a walk for the fourth time, he saw — and was stunned —- lost in the same —- there is a monk in front, just a sannyasi, all the worries, wishes, fears, of the world.

A saint free from Karma, interpretation, world and sentiment was all to see and Siddhartha’s mind went towards disinterest, then left everything, that palace of the father, the kingdom in which everything was, that handsome wife Yashodhara, Tiny The boy Rahul abandoned everything. Started asking for alms, attained yoga practice from teachers like Kalar Kalam and Uddak Ramputra. He was not satisfied even with yoga practice, Mausoleum. Meditated, gave up food, the body dried up. Many years have been doing hard penance, but not satisfied, in the end the decision came that nothing is right.

‘Sangh Sharanam Gachchami’ means that I take refuge of the Sangh, Sangh is not the Sangh that you are thinking, Sangh means all those who have lost their source, who have gone out in search of truth, who have taken sannyas, who have taken life The enjoyment of luxury, etc., all left. Buddha finds the truth and goes to the ‘Buddha’.