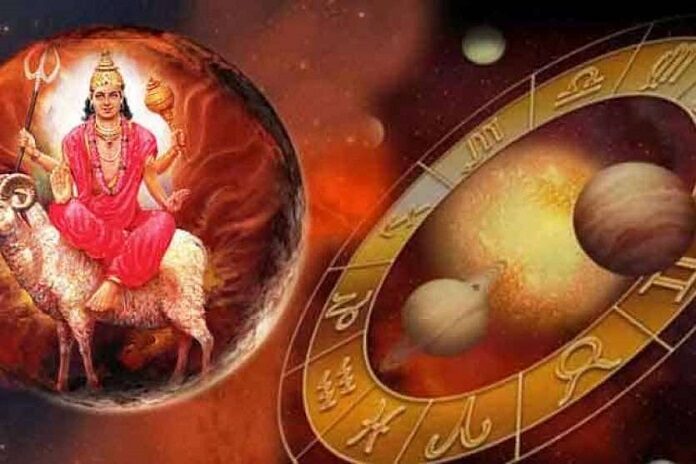 Mars is the son of Earth. It has four arms. Its hair is red colored. It has power, trident, mace and vermudra in its hand. He is wearing red clothes and is wearing a red garland around his neck.

The height of Mars is not very big, his height is short. Lord Mars’s chariot is of gold and red color. It has red colored horses. On its chariot, the flag generated by fire keeps waving.

Earth’s father is the planet Sun and mother is Moon. Mars is the son of the Earth. The sun and moon are its maternal grandfather and grandmother.

Mars is the lord of two zodiac signs Aries and Scorpio. Mars is high in Capricorn and low in Cancer. Sun Moon and Jupiter are its friends and Mercury is its enemy and Venus and Saturn are its friends and not enemies. It turns up at night, on the Krishna paksh, in the south direction. Its force is weakened in the fourth place in the birth chart. It becomes Digbali in the tenth house of the horoscope. Mars is the Lord of the Supreme, and the Lord of the Realms is the Earth. Reciting the names of the deity of Mars gives freedom from the trinity.

Mars planet is 22,40,00,000 kilometers from the Sun planet. Its diameter is 6860 kilometers and makes one revolution of the Sun planet in 689 days. The travel speed of Mars is 20 degrees in 45 days or a fraction in one and a half days. The gravity of the planet Mars is equal to one-tenth of the Earth’s gravity. 2 moons revolve around Mars planet.

Mars gives more importance to physical and mental work. It explains the whole thing with a little gesture. It has a lot of power to reason. If the God of Mars becomes angry then no one can settle down. The face of Mars is brought red. It does not have much height. Mars has a long neck. The hair is somewhat curly, the eyes are sharp, the face is long, the eyes are round, the teeth are very beautiful. Its personality is influential and Mars is independent minded.