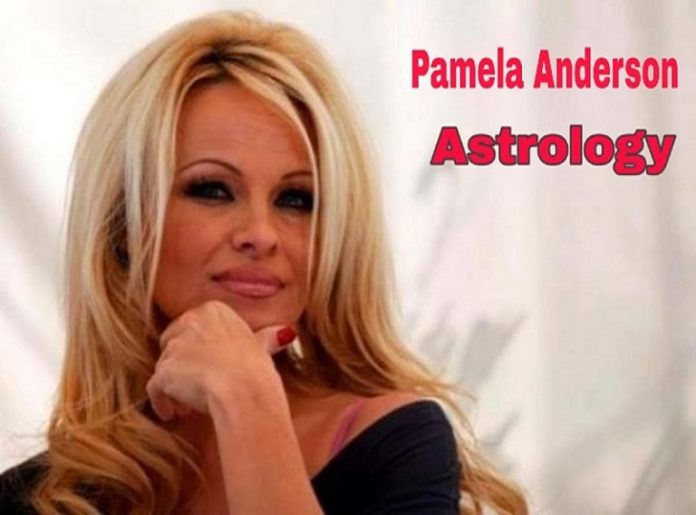 Pamela Dennis Anderson is a Canadian Hollywood actress and also starred in several television serials. He was born in Taurus Ascendant and Aries zodiac. Ketu was the Mahadasha at birth. Pamela Anderson’s father’s name is Carol Anderson and mother’s name is Barry.

Due to Taurus ascendant, they will be fond of beautiful clothes and jewelery. Their anger will reduce, but on impulse, everything will be ruined or destroyed. They will not get angry without reason. Due to the Taurus ascendant, you will be ready to help others. They would like to live on the banks of river or ocean. Have to stay away from the relatives because their behavior will be malicious towards them.

The lord of Ascendant is Venus in the fourth house. Venus is making them illuminating family names. Property is also being made rich. Venus planet is giving change in marriage i.e. getting more than one marriage.

Sun is the Raja Yoga factor in his horoscope. Sun and Mercury being in second house is prolonging their lifespan. All kinds of material, pleasures and opulence will also be attained. Sun being in second house has been giving good education, wealth, good health and good business. Pamela will get her mother’s property.

It is not auspicious for the moon to be in the twelfth house. Eye diseases have been given, especially the left eye will become more weak. If the mantra of Mahamrityunjaya is chanted every day, everything will be good in life. The presence of the planet Rahu along with the moon will increase their secret enemies and is also indicating to give venereal disease.

With Mercury in the second place, his voice will be sweet and humorous. It will earn money through eloquence, that is, they will get money by speaking. She is the spot-answer.

Jupiter being in the third house will increase the happiness of their siblings. Their planet Saturn is also good. He will be honored by the state government. Due to Rahu planet, it is away from its birthplace, there will be more obstacles in their life, but these obstacles will not stop their progress. Moon is afflicted here by Rahu, due to which they will lose sleep and will have some worry in life. Ketu in sixth house will give him a healthy & beautiful body. Once in your life, the dog will bite, if the dog does not bite, then some or the other will surely bite.

Venus is afflicted by the planet rahu in his horoscope & the planet Mercury is also influenced by Ketu due to which he had to suffer sexually during his childhood.

Pamela Anderson’s marital life is tragic as Mars, the lord of the seventh house, is located in the eleventh position from its location and Jupiter is looking at the seventh place due to this, he has severed his relationship with his spouse. Mars and Saturn inspire them for love marriage. The first marriage was to Tommy Lee, the second marriage to Kid Rock. And the third married Rick Salomon.

Due to the relationship of Mars and Saturn from fifth place, love will continue in their life and life will be fluctuating, but in the end fighting with all the problems, Pamela Anderson will win and by an NGO Will also do social work.

If you have Vastu faults at home, do this remedy.