Home Articals Why is the God’s Aarti performed? 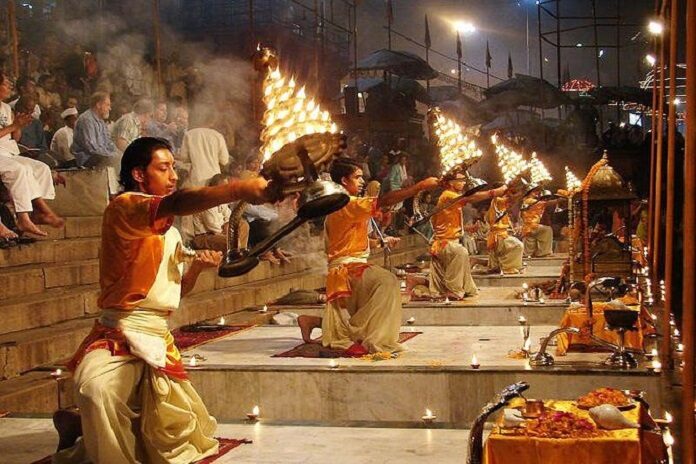 Aarti has special significance after worshiping in Hinduism because worship is incomplete without Aarti. Aarti means – remembering, honoring them, praying and praising their presiding deity in front of God praising and singing songs, Aarti is called Aaratrik, Aartrik or Niranjan.

The word Aarti is also from Artika Prakrit form which means ‘Arishta’ which is related to Madhurya-worship.  Aarti Varna means ‘Arti-Nivaran’ to save our Lord from evil. Aarti is performed after worship so that the presiding deity will complete all the shortcomings during the worship.  The Skanda Purana states that:

That is, if the worship mantra is inferior, the action is inferior, then even after dismantling, it comes to perfection. If a person does not know the mantra etc., does not even know the method of worship but does the Aarti of his presiding deity, then God accepts his worship completely.

Worship, recitation, Havan-Yajna, marriage, any auspicious activities, when the worship is performed, the Aarti is definitely done after the worship. Hindu Gods and Goddesses have different Aartis. The presiding deity or Lord Aarti is performed. Before the Aarti, one should chant the Beej Mantra, write on the Niranjan Thali, Ghantika, Jal-Kamandal, etc. by Om Chandan and during the Aarti, the plate of worship should not be turned round. One should make Om while performing Aarti. Aarti should be rotated according to the mantra words of the deity whose deity is worshiped, before the aarti, flowers should be offered to the Lord and a plate of aarti should be prepared by playing instruments like drum, conch, gong, trumpet etc. Aarti should be sung while cheering. In the Har ki Pauri located in Haridwar inside the world, Goddess Ganga’s evening aarti is made. The Ganges Aarti of Dashashwamedh Ghat in Varanasi is world famous; Dashashwamedh means the sacrifice of ten horses here.

The Aarti of Goddess Vaishno Devi is very beautiful and everyday it is very beautiful and aarti is performed with hymns. In Mehandipur Balaji, millions of people come and see the aarti every morning and evening in Hanuman ji’s Aarti. The shadow of the supernatural image of Shri Krishna in Mathura makes everyone happy. Aarti should be done with camphor or ghee. There should be an odd number of Aarti like 1,5,6, 6, 11, 21 etc. but the Aarti should not be rotated 3 times. Aarti is performed in five ways, first by Deepmala, second by a conch filled with water, third with washed clothes. Aarti is performed by fourth mango or pipal leaves and fifth part of the body ie brain, heart, shoulders, hands and knees. Aarti is also done with Karpur or five lights called  “Panch Pradeep”. Aarti with five lights also has a scientific meaning. In this five lights represent the five elements present in the universe. Our body is made up of the five elements and the same sky, earth, water, air and fire will merge into the five elements.

While performing the Aarti, rotate four times at the feet of the idol of Lord Ishtadeva, twice in the navel, once on the face and seven times on all the limbs, the aarti should be started from its left side and taken to the right. After the aarti is completed, all the people who are there should see the aarti from the right side. While taking the aarti, both the hands are folded downwards towards the lamps and then apply it on the forehead.

Kalash, water, coconut, gold, copper, water of rivers, betel nut and basil should be kept in the place of worship before performing the Aarti.

Lord Shiva should perform the aarti of Rudra five, eleven or fourteen times because God is three-eyed, Rudra is eleventh, Chaturdashi is the presiding deity, so it is necessary to rotate 11 or 14.

Lord Vishnu should perform aarti for twelve times as Vishnu is related to Dwadash, his date is also Dwadashi, “Om Namo Bhagwate Vasudevayah” is the Dwadash Akshar, therefore Lord Vishnu’s 12 Aarti should be rotated.

Aarti of Durga Mata should be performed nine times as Mata is nine forms of Durga, Navami Tithi is the Navarna Mantra of Nava Akshar, therefore Mata Durga should be rotated 9 times.

Aarti of Ganesha should be rotated four times as Ganesha is the lord of Chaturthi Tithi.

The Sun God should perform aarti seven times as the Sapta Rashmi of the Sun is associated with different seven rays and the chariot of the Sun God also has seven horses and is the presiding deity on the seventh day.

Aarti of any deity should be performed 7 times.

There are five types of Aarti and one should perform Aarti five times. The five aarti are such as’ Mangala Aarti ‘, Singhar Aarti’, ‘Rajbhog Aarti’, ‘Sandhya Aarti’, and ‘Shyana Aarti’:

After the Aarti a mantra is chanted with folded hands:

That is, having the same vigorous character as Karpoor, the embodiment of compassion, the essence of all creation, the one who bears the serpent as a necklace, always reside in my heart with Shiva, Parvati Mata Bhavani, they are my Greetings. This mantra is spoken because when Lord Shiva and Goddess Parvati were married, Lord Vishnu praised this mantra.