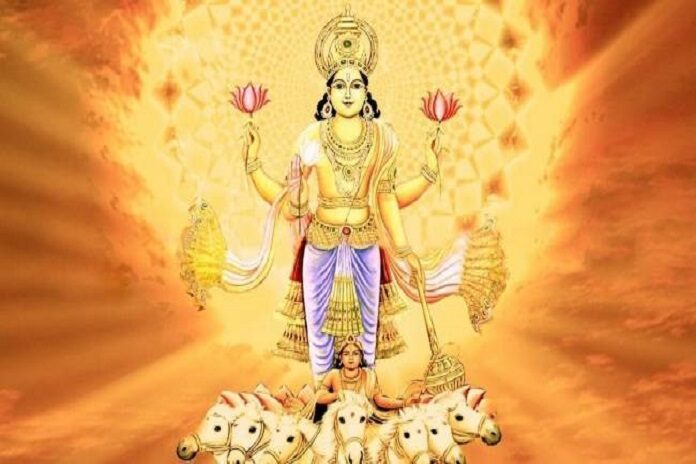 The Sun is the king of planets. It has a face resembling the shape of a lion. The face is wide and oval. Their body is yellow or red in color. Attracting personality. The normal medium height is neither too long nor too short. Shoulders are broad and athletic. The bones are fully developed. Has a thin waist. Sun speaks less. It has a thin waist, slim body. Its speed is very fast.

Since the Sun is a creator, it has a name called Savita. This whole world has originated from the sun itself. Sun is the soul of everyone. The sun god has two hands, it sits on the lotus seat. He has a golden crown on his head and a mother of gems around his neck. He has lotus in both his hands. His chariot has seven horses. The name of Lord Surya’s charioteer is Arun.

Lord Sun has two wives, the name of one is noun and the name of the other is Nakshi. The noun has many names like Surenu, Rajini, Dyu, Tvashti and Prabha. And Naksubha’s other name is Chhaya. The noun is the daughter of Vishwakarma Tvashtha. Vaivaswatmanu, Yama, Yamuna, Ashwini Kumar, Dwya and Ravinta are born from the first wife noun. Saturn, Tapati, Vishti and Savarnimanu have got these ten children from their second wife Chhaya.

There are 12 powers of Sun planet named Ida, Sushumna, Vishwarchi, Indu, Pramardini, Praharshini, Mahakali, Kapila, Prabodhini, Neelambra, Ghanantastha and Amrita. The supreme deity of the Sun God is Shiva and the Pratidhi deity is Agni (God of Fire).

5,6,7,8 from the place in which the Sun is sitting in the horoscope, and whatever planet will be in the 9th house will be retrograde irrespective of anything written in the ephemeris.

Sun is the lord of a zodiac Leo. It is high in Aries and low in Libra. The Moon, Mars and Jupiter are its friends. Venus and Saturn are its enemies and Mercury is neither a friend nor an enemy.

Sun also revolves around a catastrophe. The Sun completes one round in 25 days 8 hours on its axis self-cruises. The sun stays in a zodiac for a month.